I realized while preparing this post that I have used the phrase “play back” donation history in four different posts — in measuring retention, in the power of commitment and consistency, in my first post on customization, and yesterday.

But I realized I had not provided the intellectual background for why, other than as an example of commitment and consistency.

That ends today.  Kessler and Milkman of the Wharton School did a study of identity in charitable giving.  As they are from Wharton, they gussy up the paper with all sorts of stuff like

But the paper is basically did two split tests with the American Red Cross.  The first was with lapsed (25+ month) donors, where the test version added the line “Previous Gift: [Date]” at the top of the letter (this was the only change).  Lapsed donors renewed 20% better when this statement of their donor status up front.

Also, response rates were 6-8 percent.  Can someone tell me what Red Cross was mailing to lapsed donors in 2010? Because if it wasn’t gold bricks, I want to test it.

I would wager that this is part the idea that the nonprofit knows who I am and what I’ve done.  It’s nice not to be treated anonymously, especially in this day and age. 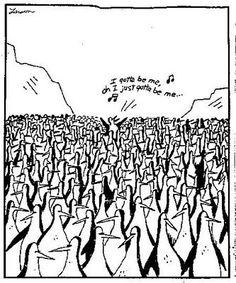 Copyright: someone who isn’t me. My apologies.
If it helps, I owe all of the Far Side books…

Part of this is reminder: “oh, goodness me, I meant to send a check, but I forgot.  Has it been that long?”.  Part is almost certainly shame.  Like we said yesterday, people want to feel good about themselves and a donation four years ago likely isn’t enough to cut it.

The second test looked at community identification.  People received solicitations for one of four efforts: the annual drive, the state drive, the winter drive, and the city drive (with the name of their state and city filled in).  Customizing this down to the city level significantly helped response rate:

There was also a 4.8% higher average gift for those who received the city mailing.

The authors went a step further and looked at community size.  Sure enough, people from smaller communities were even more influenced by having the drive be about their city than people from larger ones.  After all, it’s easier to have community pride for Greendale, WI, than the entirety of Chicago, IL.  In part because Greendale is awesome, but mostly because of size.

So these two types of priming work and are thus things that can work for us in the mail, on the phones, and online, considering that the costs of these types of tweaks are typically low.  So go forth and customize!

Priming with donation history and localization