We have a phantom member of our family. 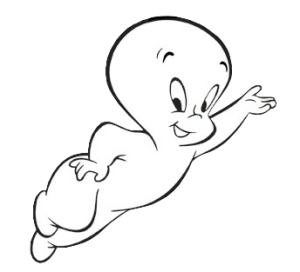 (not like this, although does anyone else find it creepy than this dead child is following people around in children’s entertainment?)

When we moved into our first house, one of the people who sold us the house was Kimberly something-or-other.  We immediately started getting mail for Kimberly Ellinger – her first name, our last.  Our best guess is that a mailer assumed she got married, or divorced, and changed her last name to the one that was now on the house.

That was 2003.  For us, it was five residences in three states ago.  During that time, no one named Kimberly Ellinger ever sent in a donation, mailed back a comment card, or bought something through the mail.  Because she doesn’t exist.  Never has.

But she apparently loves Land’s End catalogs.  She clearly needs car insurance pretty badly.  And she got her AARP card last week.

AARP is one of the biggest acquisition mailers in the United States with about 170 million pieces going out recruiting new member each and every year.  Part of me felt a little bit good that even an organization like this can fall prey to something that costs non-profits each and every year: bad data.

You may think that the worst thing that bad data can do is run up your costs.  Au contraire, mon petit fromage.*

In 2014, a man received a letter from OfficeMax that was addressed to his name, with the second line of the address reading “Daughter Killed In Car Crash.”

Yes, a year earlier, his daughter had in fact been killed in a car crash.  As someone who has lost a daughter, I can tell you that this type of solicitation does not make me want to buy office products.  It makes me want to find the person responsible and punch them until I run out of fist or they run out of face.

But there probably was no person responsible.  A screw-up that large requires a faulty system to let that letter go through.  And every snowflake in that avalanche pleads not guilty.

While not as drastic, bad data is costing you dearly.  Here are some systems you can set up to make sure that you aren’t sending the next such letter (and, more mundanely, save on the costs of bad data, which include both costs of mailings and the opportunity costs of missed revenues):

Finally, at a certain point, give up.  If Kimberly Ellinger hasn’t answered your first 50 mailings, number 51 probably isn’t going to sway her.  Also, when you do, do the industry a favor and mark them as “do not rent.”  Since you are going to be going after the people who provide you with bad names, it’s best not to become one yourself.
* This may surprise you, but I don’t actually know French.

The curious case of Kimberly Ellinger