If you are a privacy advocate who doesn’t believe the Internet should be following you around, this is not the post for you.

In fact, if you don’t think the Internet should be following you around, the Internet may not be for you and you’d probably do well to shut it off now.

There is a famous New Yorker cartoon from the early days of the Internet when you could call it cyberspace or the information superhighway non-ironically. 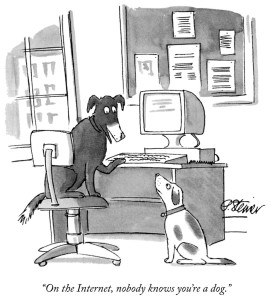 That simply isn’t the case anymore.  With cookies and tracking technology, the Internet not only knows you are a dog, but it knows what butts you have recently been sniffing.

OK, that analogy went somewhere unpleasant but suffice it to say that ads follow you around the Internet and learn your behavior.  Read about the uncanny valley-esque level of personalization that can result here.

Additionally, sites with log-in functionality – Google, Amazon, social networks, and so on – not only know where you’ve been going, but who you actually are IRL (in real life, which used to be a cool acronym, but isn’t anymore because I just used it).

As consumers, we can blanch in horror and retire to our fainting couches.  As marketers, there is a significant advantage to be had here.  So here are four tactics that work with the new new media.

Remarketing.  This is what happens when you go to a site, then leave, then ads follow you around the Internet saying “would you like those shoes you were looking at now?  How about now? Maybe now?” until you want to go back to abacuses. While you were on that site, they put a cookie on your computer, which lets that site and other sites know where you were.  They then spread the word to the ad network that so-and-so was this close to buying shoes.

I make this sound sinister, but which would you rather see: an ad for something you are interested in or a random ad?  Personally, I like that advertising is at least trying to be relevant.

What works for shoes can work for your nonprofit.  With a few simple tools provided to you by remarketer (there are a number of them, including AdRoll, Bing, Chango, Google, Google properties like YouTube, Retargeter, Perfect Audience, Wiland, etc.; if you want a review of some of these sites, try this Kissmetrics blog), you can put a cookie on your site and begin asking the people who have come to your site if they’d like to take the next step.

Cotargeting.  Google, Facebook, Twitter, and some outside firms like Wiland will now allow you to upload your list of donors, newsletter subscribers, volunteers, or whatever other group you want to target, with their email addresses.  The match rates for Google and Facebook are really quite impressive (hat tip to Wordstream)

Then, these services will market your message to those specific people.

The next step (and it’s started pilot testing, as I understand it) is for your TV box (whether cable or satellite or cord cut or whatever) to customize as well.  I applaud this development.  I’m a semi-avid football fan who does not drink beer and will never own a truck.  Eighty percent of football advertising is wasted on me.  It would be lovely to say to those companies “you save your money; I’ll save my time” and we part as friends.

You’ve heard me preach multichannel/omnichannel-ness on this blog; now you have a way to replicate and reinforce the messages you are giving out through other media through advertising.  Your broadcast messaging just became a direct marketing one.  Huzzah.

The supporter cards that Wagner was processing in Des Moines were feeding into the computers at Strategic Telemetry’s Capitol Hill office.  Those commitments, along with some traditional polling, had already helped to refine Obama’s back-of-the-envelope vote goals in Iowa.  But the real power of Strasma’s black box, like all microtargeting models, was extrapolatory: the names of whose had signed supporter cards went in, and out came the names of other Iowans who looked like them.  These algorithms were matched to 800 consumer variables and the results of a survey of 10,000 Iowans.

Low-budget advertising.  I promised you a trick on Tuesday and earlier in this very piece.  The trick is a two-step process:

This is certainly a short-term strategy, but can be used to boost a campaign in a pinch.

Hope you enjoyed online acquisition week.  In honor of it, I’d create ads to follow you wherever you go, but since I don’t really have a revenue model yet, that would be kind of counterproductive (“I’m advertising to try to get people to come to a site that I don’t make money on.” “How do you hope to get money from that strategy?” “Volume!”).

Please let me know at nick@directtodonor.com or in the comments what topic(s) you’d like to see in the future.  Thanks!