There is a forthcoming study in the Journal of Marketing Research looking at the choice of defaults in donation asks (e.g., which radio button you have auto-clicked on your Website for donation level).

Let’s leave aside the fact that there is an obvious correct answer to this*.  It brings up an interesting conundrum: all other things being equal, would you rather have fewer, better (which we will operationalize to higher average gift) donors or more, lesser donors (lower average gift)?

This is a realistic question.  If you graph out your acquisition success by outside list that you are using, chances are you will get something like this: 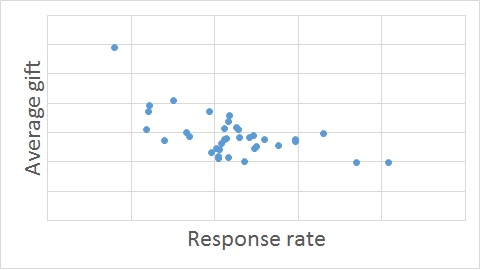 This is actually a good sign.  It means that you are using the best lists, as you are approaching something close to the Pareto efficient frontier (a fancy way of saying you can’t grow any more; you can only make tradeoffs).  After all, if there were a list that was in the upper right here — high response rate and high average gift — you’d be doubling down on that.  But since there isn’t, do you invest more in the upper left or lower right?

This has far-reaching implications.  For example, what metric do you use to determine the success or failure of an acquisition piece?

Yes, in a perfect world, you would use lifetime value.  But we don’t live in a perfect world (if you doubt this, watch a presidential debate at random; this could make Dr. Pangloss open a vein).  Lifetime value takes time to manifest and you need to know what you are making a decision on tomorrow.

(Or, as I’m starting to do, do you look at the donors that a campaign is bringing in and their initial give, then projecting out their average gifting as a poor man’s model for lifetime value?  This is a better solution, but again, don’t let logic get in the way of a good thought experiment.)

This week, I’d like to explore this thought experiment in some detail (in part because it’s something I’m struggling with as well), laying out the case for both approaches and seeing what the implications of this are.
* The correct answer is to set up ask strings and defaults based on previous giving history and/or modeling; customization cuts this particular Gordian knot.