As you saw yesterday, I’m partly biased on the issue of overhead rates, because I’m professionally overhead.

However, overhead ratios are not just a suboptimal way of evaluating charities.  If that were the case, you could say stand them being part of the mix as people evaluate nonprofits.  In reality, they are actively negative ways of evaluating nonprofits — to a point, the nonprofits that do the “worst” on overhead are actually better and more effective organizations.  They avoid the starvation cycle outlined in Gregory and Howard’s article and are investing enough to build the infrastructure of a vital, vibrant organization. 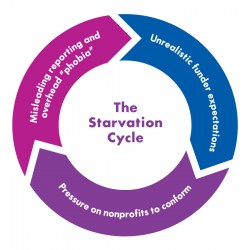 Additionally, consideration of overhead crowds out consideration how much impact a nonprofit is having.  Leaving aside for the moment the obsession with overhead that caused Charity Navigator to rate an active scam of a cancer charity with three stars, there is research to bolster this negative impact of overhead.

The journal Judgement and Decision Making called this the evaluability bias: people look for and want one easy number that tells them how good something is.  They found that when people are presented with a charity, they look for a low overhead rate and value it for its own sake.  However, when presented with two charities and both overhead and effectiveness ratings, they valued effectiveness over overhead ratios.  This means that people actually care more about whether a charity is effective or not at what they are trying to do.

One is reminded of the man who is looking for his car keys under a streetlight.  A policeman comes over and asks what the man is doing.  After the explanation, they both look under the streetlight together. After a few minutes the policeman asks if he is sure he lost them here, and the guy replies “No, I lost them in the park.”

“So why are you searching here?”

“Because this is where the light is.”

Part of the obsession with overhead rates is because Americans believe nonprofits spend far more on overhead than they do.  This is no doubt spurred by news stories about the grossest abuses of nonprofit status and, because we can remember these, the availability bias kicks in.  We forget that the reason that the story is news is that it is the exception and not the rule.

Part of this obsession is self-inflicted.  We nonprofits are the ones who talk about how XX cents out of every dollar goes to the mission and not about how giving to others is life-affirming and one of the most powerful positive things about being human.  We plant trees so that those who come after us can sit in shade.  It’s a beautiful thing with real impacts, cheapened by a discourse of whether you spend 6.2% or 6.7% on administrative costs.

And part of it is that overhead ratings and discussions of CEO compensation are baked into some “charity watchdogs.”  I’ll cover Charity Navigator and their hypocrisy on overhead ratios tomorrow.

The seductiveness of overhead rates