Hopefully by now you’ve tried out some free ways to stay in touch with your supporter base and attract new supporters and you are ready to test out spending some money on direct marketing.  I’ll start with your existing donors. 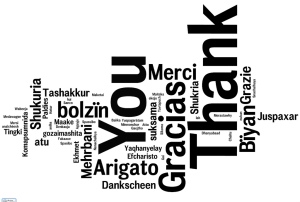 Often, thank yous are an afterthought or a legal requirement.  In reality, they are a great way to deepen a relationship with a donor.  Every donor should get at least one thank you, generally in a similar format to how they gave the gift.  That is, if they mailed you a gift, mail them back a thank you note; if they gave a gift online, make sure they get an email receipt.

Please note I say “at least one thank you.”  Gratitude is something to be practiced throughout donor communications largely for its own sake, being the right thing to do and all, but it can also be profitable.  A way to dip your toe into the mail water is to start sending thank you letters to online donors of a certain amount or more.

What is that amount?  Whatever you are comfortable with to start.  You can dial back if the mailings get too onerous (a nice problem to have) or expand the program once started.

This mailing does a couple of things.  It conditions the donor to expect things from you in the mail and that those will be good things.  Also, just as it is better to be a bit overdressed instead of a bit underdressed in everywhere except the tech sector, it is better to be just a little bit more appreciative of a gift than your competitors other worthy causes.

To keep your early losses to a minimum, start your mailings with a few tried-and-true pieces.  Some that generally work well are:

So that’s what to do with current donors.  How do you talk to potential donors without breaking the bank?  We’ll (try to) cover that Tuesday.

Next steps in direct marketing